We have found a video about SIM boxing in Uganda, made it’s transcript and got some awesome insights.

Firstly, the most interesting point is that people and government evaluate SIM boxing activity totally different.

The below comments represent what people think about SIM boxing.

Six suspects whose names were withheld were arrested yesterday following the involvement in an illegal act named Sim boxing. According to the Uganda Communications Commission PR Pamela Akunda the suspects used metallic boxes where more than 250 SIM cards are inserted and through technology they are enabled to allow illegal termination of calls.

“Use technology to illegally terminate international or local calls. This is really done in a box where SIM cards are inserted and through technology enabled interfere or otherwise to get into a licensed operator systems to allow illegal termination of calls.

Yes, GSM termination is profitable from countries where the rates to Uganda are extremely high because of extra profit of GSM operators. Here is an example how routes to Uganda are offered/requested.

These machines that allow illegal termination of international and local calls include a generator, wires with small antennas, boxes that allow insertion of SIM cards, mobile phones – among others.

“So when you put up this assembly you can have a communication whereby the slot here – then this equipment.”

Acunda says that the suspects had been involved in these illegal activities for six months now and this fraud had led to loss of government revenue.

By official data sources, GSM terminator could earn up to $10’000 a day depending on equipment – here is one more proof. By our estimate, with the investments of $4000-$5000, GSM terminator can earn $150 daily. So with a minimal configuration and average estimates they could earn almost $30000. Not bad, right?

What would help avoiding to be detected:

“Through this illegal act, government loses a lot of revenue. This fraud mainly manifests through receiving international calls as though they are local calls.”

“So by putting together these equipment they are setting up an illegal telecommunication network. So probably technologically that system and if it may be generated data bundles that can be used by somebody illegally. And because it is illegal, you can’t know who is using that data. And because of that is there concern not just to the operators but even to the whole public.”

The suspects are expected to be produced in a court tomorrow.

“So the main offenses and we’re still looking of the file we shall properly present them in court with a sheet all the counts.”

“What is still not clear is whether these are the only guys coming out this illegal operations. UCC needs to act fast or else this could develop into a very big criminal threat canary megumi NBS live at 9.”

Yes, definitely there are many GSM terminators that do this voice traffic termination at their own risk. But not doubts, that smart guys using quality equipment with smart software and wide business contacts could do GSM termination and earn much money.

The officials say SIM boxing is still rife.
This article says: “In a March 19 2015 letter, the FIA boss, Sydney Asubo, warned Mutabazi that over the past three years the country had lost up to $144 million accruing from incoming international telecoms traffic that is disguised as local traffic by simboxes.” 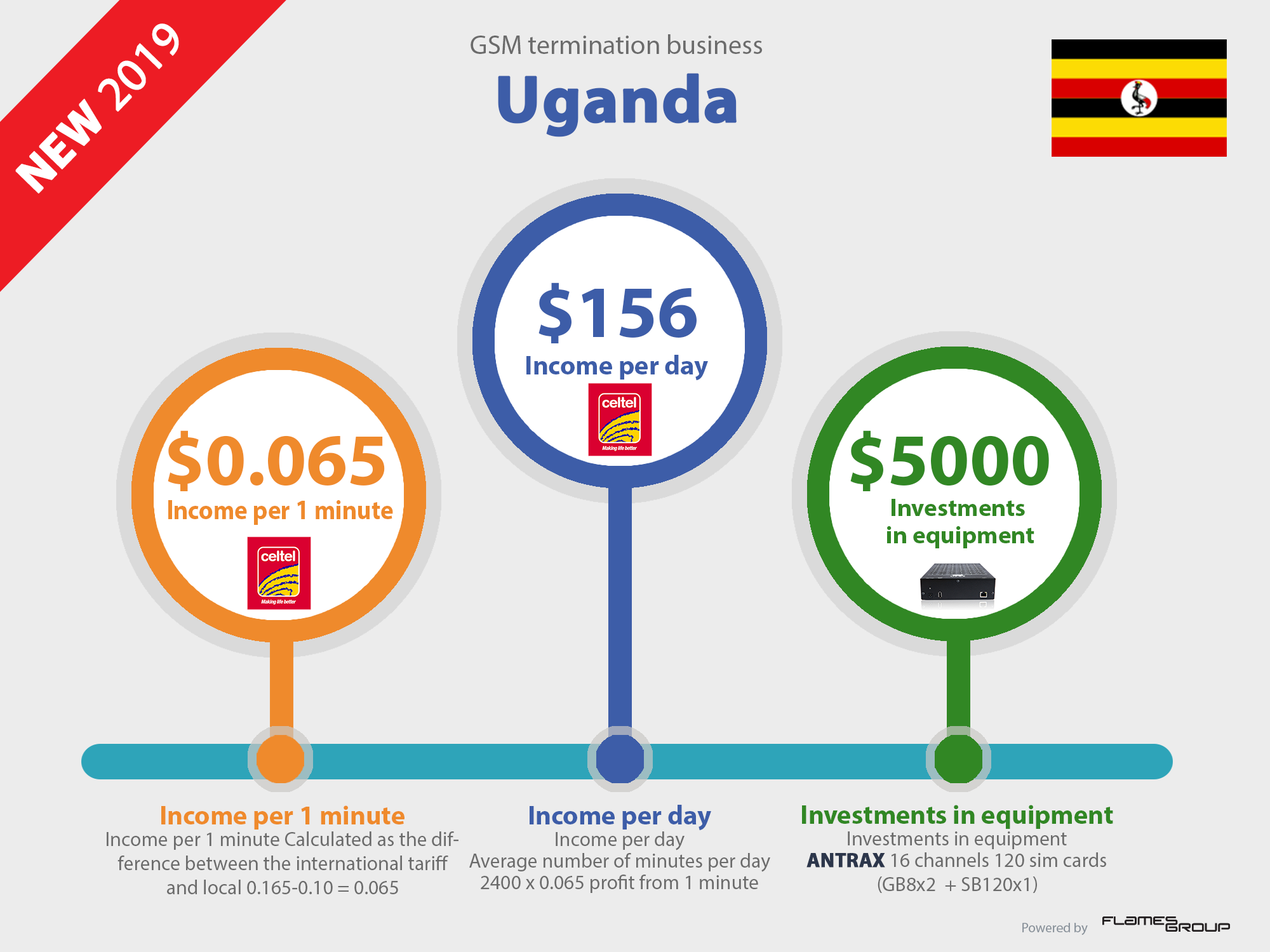 Read our the most popular posts about GSM termination business:

Was this information useful? Share the business idea with your friends!