Did you know that ANTRAX provides it’s software open sourced? So everyone can install it, do some edits and use to make VoIP calls. Click here to download ANTRAX software.

Let us tell more about ANTRAX and how it can be used. ANTRAX is a solution to termination of voice traffic from VoIP to GSM network.

ANTRAX consists of the next main components:

ANTRAX components communicate with each other by RMI.

As already mentioned control server is a central component of the system. Main goal of control server is to connect SIM card with GSM module based on given logic. Also it stores all configuration and statistics in database, communicates with gui client and performs routing of VoIP traffic on soft switch.

Main function of sim-server is to find new SIM card, read necessary information and then process requests on it.

Main function of voice-server is to find unused GSM module and then connect it with provided SIM card. Unions of GSM module and SIM card called call channel and they are using to process termination and origination calls.

GUI-client installed from control server by using Java Web Start technology. It communicates with control server from which it was installed and allows to configure and monitor current system.

Module scripts is a reference implementation of plugins api with all available for now generators, filters, factors and other logics.

Currently as soft switch in antrax system uses Yate. On Yate side interfacing of different VoIP protocols is accomplished and transcoding of audio codecs (if necessary). Coordination of different VoIP protocols as well as transcoding of audio codecs (if necessary) is fulfilled on Yate side. In its turn control server uses Yate external module protocol to communicate with Yate. 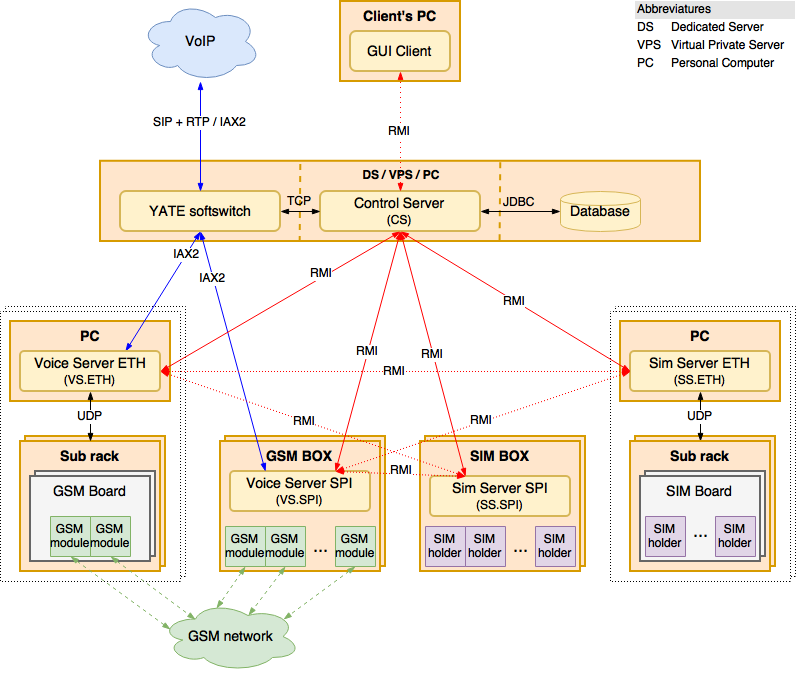 ANTRAX uses multiple modules Maven project layout.
In addition there is a storage module with DAO layer and migration scripts.